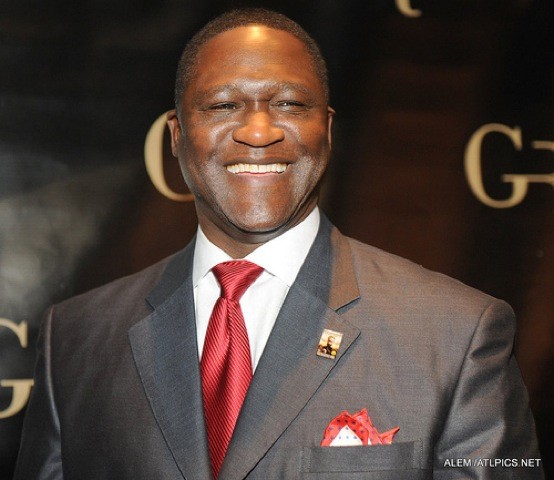 We just played the Atlanta Hawks recently and I saw a familiar face, Dominique Wilkins, a.k.a., the “Human Highlight Reel.”  A few years ago, I was at an “NBA Cares” event with Dominique in DC and that is where I first really had the chance to talk with him and get to know him a little bit.So, my team is in the Phillips Center in Atlanta warming up and getting ready for our game against the Hawks and I look over and see Dominique on the sidelines in a suit getting ready to do the TV for the Atlanta Hawks broadcast.  But the crazy thing is that he still looks like he’s in good enough shape to jump into an NBA game right now, today! So I go over and say hello and ask him, “Can you still windmill dunk?  It looks like you’re ready to still play?”  He says back to me laughing: “I used to be  the Human Highlight Reel….now I’m just the human.

“We talked for a bit and he said that he’s still fine playing in the half-court, but that to go up and down the court is a little bit tough. (probably on his joints). It’s funny because even though I just met him a few years ago, I felt like I knew him from the time I was young because I watched him in a great dunk contest when I was in middle school.  That was the time that Michael Jordan ended up winning the contest by dunking from the free-throw line.  But I think it’s hard to measure what someone like Dominique Wilkins means to the game of basketball.  Obviously, he helped build the NBA into what it is today, but what about all the kids out there, like I was at the time, who can still vividly remember almost the exact images of the dunks he did, and the tenacity that he brought to the playoffs against the Celtics back in the day.  The NBA is a great league because of so many reasons and one of them is the great players and people (like Dominique) that helped build it into what it is today.